To get in touch with a minister, call the office and they will help you get the information you need. Annie Gonzalez is a lifelong UU from the midwest who started at First Parish Bedford in August 2018. She has lived in 7 states and has been involved in 10 UU congregations. Previously she served as the Young Adult and Campus Ministry Associate at the Unitarian Universalist Association for five years and was affiliated as a community minister with First Parish Dorchester.

Annie lives in Malden with three housemates (two of whom are also UU ministers!) and her child Moira. She helped form the Boston Immigration Justice Accompaniment Network (BIJAN) in 2018 and continues to support this community’s efforts to get people free from immigration jail in New England. Along with these endeavors you might find Annie baking pies, going for a run, playing board games or worshipping with her Christian small group called “NightChurch.” Rev. Megan Lynes grew up UU in the Boston area, and was ordained in 2008 by the congregation of Canton, MA, where she did her student ministry. Megan’s ministry has included serving as a chaplain at Brigham and Women’s Hospital in Boston, with interfaith youth at Cooperative Metropolitan Ministries, and as the president for the Mass Bay UU Ministers’ Association.

Megan came to the First Parish in Bedford in 2009, and served nine years as the Parish Minister, followed by two years as the Minister of Faith Formation at the First Church in Sterling, MA. During the pandemic, Megan stayed home to be with her three year old son full time, but is very glad to be back at First Parish, (serving quarter time). In her free time, Megan loves to play with young people, garden, make art, and participate in Playback Theatre. She lives in Stow with her best friend Nazish, her son Jesse, two cats, two fish, and four chickens. Lisa Maria Andreoli Steinberg has worked in churches for over 25 years, first as a musician and then in faith development ministries. She brings a background in education, social work, music, and theology to her career in faith development. As a graduate student, Lisa Maria studied at Starr King School for the Ministry in Berkeley, CA and at Andover Newton Theological School in Newton Centre, MA where she graduated with an M.A. in Theology and the Arts with concentrations in education and liturgical arts. She resides in Shirley, MA with her husband, their two children, and two cats. Bradford Conner has been Music Director at First Parish since the Fall of 2005 and came to us with 23 years’ experience in directing a church choir in southeastern Massachusetts. Over the years, with his prior church, he expanded the choir and broadened its repertoire. He conducted many special musical programs and initiated and produced several successful choral festivals.  Earlier in his career Brad held positions as pianist, vocalist, and choir director at a variety of church congregations, including Greek Orthodox, Jewish, and Unitarian.

His academic background includes degrees in musicology/performance (choral and instrumental conducting) as well as undergraduate degrees in German and in business administration. From 1986 to 1991 he was general manager of the Pro Arte Chamber Orchestra in Boson.  Brad’s current day position is as an administrative assistant at Harvard Law School.

So much for the formalities.  Brad also has an active performing life outside First Parish! He is a Producing Director of American Classics, a non-profit dedicated to American music, as well as partnering regularly as a pianist/vocalist with baritone Ben Sears.  The “Ben and Brad” duo specializes in researching the songs and music of composers from the Great American Songbook such as Irving Berlin, Richard Rogers, and Jerome Kern, among others, and creating performances honoring special occasions based on the lives of those songwriters.  Sears and Conner perform regularly in the Boston area and have been featured on WGBH, WBUR, WHRB and WERS radio. Sandra comes to First Parish via a circuitous route that started with a degree in classical voice (minor in organ) from the University of Albany, NY. After graduate voice study at New England Conservatory, she sang for 13 seasons as a member of the Handel and Haydn Society Professional Chorus.

Life brought further study, resulting in a Kodály teaching certificate and an MM in conducting.  She has taught classroom music, directed church music programs, and taught a private voice studio where she specialized in adolescents and their healthy vocal development.

Sandra enjoys studying organ with Heinrich Christensen, director of music for Kings Chapel, Boston.  She serves as soprano section leader for Boston’s Coro Allegro, a chorus for members and friends of the LGBT communities that affirms, strengthens, and enriches the lives of its members and the broader community through the presentation of outstanding performances of classical choral music.

Perhaps her hardest and most fulfilling role has been mom to her two sons; Alex, a theatre sound designer in NYC, and Jesse, a Navy JAG officer.  She is delighted to share that she has been married to her best friend, co-conspirator, and incredibly lucky husband Stan since 1973. We’ll let you know in a few years whether this will last.  Sandra looks forward to being a positive contributor the First Parish community. Natan Wythe (he/him/they/them) has taught music, chorus, and musical theatre in public schools across Massachusetts since 2015. As a professionally licensed K-12 music educator, Natan conducts rehearsals and performances with the goals of building community, encouraging participants to discover their artistic identities, and spreading joy through vocal music, rather than as a pursuit of technical mastery or aesthetic perfection. He was raised in Los Angeles, and travelled to Boston in 2010 to attend Berklee College of Music, earning dual degrees in Music Education and Music Production & Engineering. In 2021, Natan earned a master’s degree in Music Education from Boston University, with a capstone topic in the benefits of a modern “popular music education” approach within the upper-elementary music classroom.

Natan plays piano and guitar as primary instruments, as well as ukulele, mandolin, and bass guitar. His debut americana/folk singer-songwriter EP can be found here, and he hopes the congregation will look forward to his upcoming full-length album appearing on all streaming services in the not-too-distant future! Brenda grew up near Boston but has been a North Shore resident for the past 25 years. She was blessed to be a stay-at-home mother for many years.  Once her daughter was old enough, she rejoined the work force in her fields of study – Accounting & Business Administration.  Brenda is also a licensed Realtor and occasionally enjoys assisting with referrals.  In her free time, Brenda loves spending time with her daughter, family & friends.  She also enjoys baking, traveling & watching football! Stacey is a former New Jersey native that loves living in Bedford, MA. Her only wish is that the ocean was a bit warmer! After many years teaching science in both public school and at the American Museum of Natural History, she took a break to care for her two kids and mother-in-law with dementia. She feels passionate to work for good causes, like being a teacher or supporting the goals of First Parish.  If you see her in the office, she’d gladly chat about local hikes, evolutionary biology, snorkeling, and the many ways to ride the waves at the Jersey shore.

John developed twenty-five plus years of finance experience aligning fiscal stewardship, sustainability and operational goals to the vision and mission of non-profit organizations. John holds a Bachelor of Science in General Management from the University of Massachusetts – Boston and received his Certificate of Accounting from Newbury College.  John lives in Middlesex County with his wife, two children and adorable toy-poodle.

Office Hours: During the interim period, John is not available for pastoral needs and refers all to the current ministers. 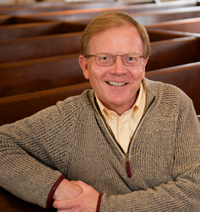 John Gibbons was Bedford’s senior minister 1990-2021, our longest-serving minister since 1800.  He came to Bedford in 1990 after a decade as minister to the Unitarian Congregation in Mendon and Uxbridge, MA. Ordained in 1980, he is a graduate of the Harvard Divinity School and holds an undergraduate degree in religion and political science from Tufts University. He is married to Sue Baldauf, a social worker; and they have one son, Eric.  In previous lifetimes John was a public school teacher, union organizer, counselor at a halfway house for teenage girls, apprentice to a Mexican curandera (healer-woman), and a salesman of pansies and parsley.

John is a participant in many interfaith roundtables, chaplain to the Bedford Minutemen, a founding member of the Greater Boston Interfaith Organization, past president of the UU Partner Church Council, and Board Chair of the Unitarian Universalist Service Committee.  He remains available for “good trouble” and is currently the Community Minister for Good Trouble at the Arlington Street Church Unitarian Universalist in Boston.

John regards the church as the last, best and most improbable hope for humanity.